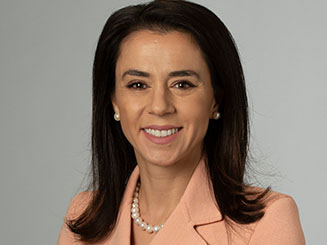 Maria S. Jelescu Dreyfus became a Director of Pioneer Natural Resources in September 2021. She is the CEO and Founder of Ardinall Investment Management, a New York based independent investment firm established in 2017. Ardinall has an ESG-based investment approach and focuses on climate change and sustainable investments.

Prior to Ardinall Investment Management, Ms. Dreyfus spent 15 years at Goldman Sachs, most recently serving as Portfolio Manager and Managing Director in the Goldman Sachs Investment Partners group, where she focused on energy, industrials, transportation and infrastructure investments in both public and private markets.

Ms. Dreyfus currently serves on the Board of Directors for both Macquarie Infrastructure Corporation (NYSE: MIC) and CDPQ (one of Canada’s largest pension plans). In addition, she serves on the advisory boards of Eni Next (Eni SpA’s corporate venture arm) and the Center on Global Energy Policy at Columbia University, where she also serves on the Executive Committee and is co-chair of its Women in Energy program. Additionally, she is a member of the MIT Corporation’s Development Committee and serves on the MIT Economics Department’s Visiting Committee. She serves as a director on several private companies’ boards in the energy transition space (battery technologies, digitization and control technologies, etc.)

Ms. Dreyfus earned dual degrees in Economics and Management Science from the Massachusetts Institute of Technology (MIT). She received her Chartered Financial Analyst designation in 2004.